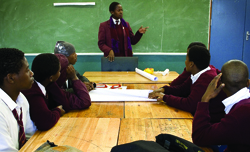 Grade 12 can be compared to the last stretch of a race, and the  most significant part to complete. If a young person would like to be employed or pursue tertiary education, they need to work hard to successfully pass their grade 12.

Nonsindiswa Dlamini’s award reveals that hard work is rewarded. Nonsindiswa was awarded top grade 12 learner at Khanyisani Secondary School in Mpumalanga. Similar to Nonsindiswa, Peer Educators from Inkunzi Secondary School, Joweli Mbatha and Gcina Siwela, were determined to excel in their studies. Their determination resulted in them being awarded merit bursaries to study at the University of Limpopo. “The teacher who did extra Physical Science classes [and my] parents were so supportive” is Gcina’s response to the question about what kept her going . Joweli says that the fact that he is the last born in his family, and that no one in his family got the chance to go to university is what motivated him to continuously study for his exams.

The value of working hard is one that is engraved onto the minds of Peer Educators from the moment they become part of the programme either in grade 9 or grade 10. They are encouraged to role model this value in all they do. Moreblessing Dheka is an example of this. In  2014, he started a study group for his grade 11 classmates. This led to  significant changes in the academic performances of the students who were part of the group.

In his matric year, Dheka’s work ethic led to him receiving three distinctions in Physical Science, Maths Literacy and Tourism. He is one of the nineteen Peer Educators in the Western Cape who received grades that qualify for a tertiary education.

The astounding achievements of Nosindiswa and other Peer Educators who passed their grade 12,  is a testament that one’s tough and challenging background does not lock the possibility of  success.